While William Shakespeare is credited with over 30 full length plays, and hundreds on poems not all of them are as well known to the general public. Works such as Romeo and Juliet, A Midsummer Night’s Dream, Othello, and many of his sonnets are among his most famous works. What do all of these works have in common? All of them have a central theme of love that is the driving force of the plot. Shakespeare wrote 154 sonnets, a majority of them being about love, with a large portion of them using the word love explicitly in the opening line. It is clear that the idea or theme of love is very important to Shakespeare’s works, and therefore Shakespeare. Shakespeare shows love from many angles however, showing both the beautiful, and the incredibly dark side of one of the world’s most powerful forces.

In Love’s Labour’s Lost, as evidenced by the title, the theme of love is incredibly pertinent to the play. Three bright young scholars and a king vow to dedicate themselves to a life of teaching and education, but they surmise that in order to do this they must avoid all distractions. The most paramount thing they vow to avoid, is man’s greatest distraction: woman. The swear off women, and therefore love, for three years, accepting harsh punishments if they break this oath. When the first man, Costard, breaks his promise, he is sentenced to “Fast a week with Bran and Water” (line 242). However, this does not seem to deter Costard or any of the other men. The rest of the men almost immediately fall in love with a visiting princess and her court, showing that even the strongest and most dedicated of men have almost no power to resist the strong temptation of love. The rest of the play details the group of men’s fruitless attempts in their quest for love. The continually try and fail to get the women to fall in love with them, but they are wiser and sidestep the men’s cheap attempts. Eventually the men get tired of catching each other in the act of pursuing the women, and decide to unite and win them over together. This results in a giving of gifts, and a play in a final attempt to persuade the princess and her friends. However this ultimately failed, and the princess tells them to return and try again in a year. It is never revealed whether or not they later succeed, but it would not be wrong to assume they never win over the women’s hearts. Ultimately, Love’s Labour’s Lost ends in one of Shakespeare’s favorite ways, tragedy.

Almost certainly Shakespeare’s most famous play is Romeo and Juliet. Containing some of the most well known lines of any play, Romeo and Juliet is indisputably an incredible commercial success. It also centers around Shakespeare’s most common theme of love. Romeo Montague, and Juliet Capulet, held apart by deep seated family tensions fall deeply in love but would never be allowed to be together. Already a tragedy in itself, it only gets more tragic as their love grows deeper and they end up running away. The play ultimately ends in a series of very unfortunate, almost comical, events which results in both Romeo and Juliet killing themselves as they do not want to carry on living without the other. This play again details how frequently love in Shakespeare’s plays end in tragedy.

Shakespeare is also said to have written some of the most critically acclaimed, and best love poems of all time. Many people believe that Sonnet 18 is the single best love poem of all time. Starting with, “Shall I compare thee to a summer’s day?/ Thou art more lovely and more temperate:” (Sonnet 18) this fourteen line poem is the pinnacle of Shakespeare’s views on love. In nearly all of Shakespeare’s sonnets he details the beautiful features of both many unnamed men and women. In these sonnets, Shakespeare details the much more alluring side of love rather than the more violent side of love in many of his plays. He writes to praise the objects of his affection instead of ultimately killing them off or having other dire consequences.

Although Shakespeare seems to vary on some of his ideas of love, he never wavers on the power of love and its infinite reach. Many of his sonnets discuss the idea of never ending love such as “So long as men can breathe or eyes can see/ So long lives this, and this gives life to thee.” (Sonnet 18). Shakespeare wants to demonstrate to his readers that he believes that love is an unwavering eternal force. Love can make humans and even animals go to never ending length for the subject of their affection. Whether its a poem written to the love of their life, or a character fighting for somebody they love, Shakespeare wants his readers to understand the power of love.

Shakespeare’s darker views on love are evident in many of his works. Countless numbers of great love stories in Shakespeare’s plays are ended through suicide or murder, such as in Romeo and Juliet. Those love stories that do not end in murder usually just end relatively poorly such as the men’s fruitless quest for love in Love’s Labor’s Lost. Shakespeare is clearly trying to show the correlation between love and disastrous results. What the motive behind this may be unknown, but the theme of love is pertinent to many of Shakespeare’s works and was clearly important to him. 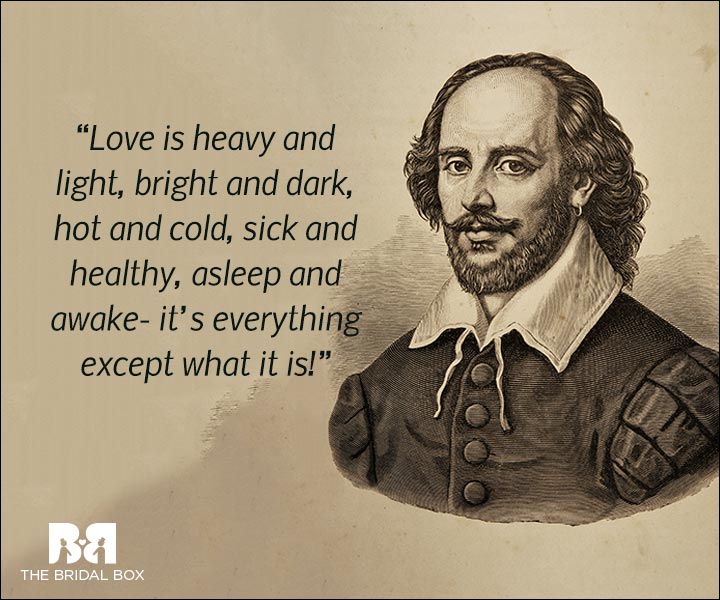