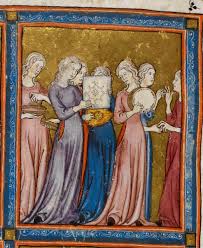 Gender roles have been engrained in society for hundreds even thousands of years. However, there have been countless movements in order to trump these stereotypes of how men and women should behave especially in regard to one another. Shakespeare took a more progressive route in the making of his play, Love’s Labor’s Lost, particularly in this time period, by changing the typical roles of men and women. While women are classically portrayed as indecisive, overflowing with emotions, and overall inferior to men; Shakespeare takes a different approach and brings light to women’s capabilities and men’s potential weaknesses in their characters.

From the very beginning of this play, the women knew exactly what they wanted, and they never turned back on it. They knew which Lords they loved and how to get them in their grasp, but led them in circles in the process just to demonstrate their authority. Women are usually portrayed as unable to make decisions, which is what makes their ability to choose what man they love and never wavering so refreshing in this play. The women are also assigned great intelligence by Shakespeare and always seem to know the right thing to do, whereas the men get flustered easily and appear to never know the right answer. Essentially, each characteristic that the men and women possess in Love’s Labor’s Lost would be reversed in any stereotypical depiction of both genders in other plays. Whether Shakespeare chose this borderline radical route to be ironic, or add to the comedic aspect of his play, it is refreshing for women to get the recognition they genuinely deserve. Because a person is female, does not mean they are unable to achieve certain things in their lifetime. Women are just as capable as the men next to them, yet, they are never given a fair opportunity to demonstrate their abilities because of the unwarranted suppression that has been engrained in society since human beings walked this earth.

In regard to this play, the five reigning queens of Navarre were the largest group of female sovereigns during the Middle Ages. These queens accomplished a successful reign just like all of the men preceding them; demonstrating how women are more than qualified to partake in jobs societally assigned to men. Not only are women put at a disadvantage for getting hired in the working industry they are also wrongfully accused of being incapable to handle their own emotions. There is a stereotype that women need men to survive and become obsessive with men that they are interested in, however, Shakespeare defeats this stereotype as the women make the Lords work for their love, essentially begging the women to reciprocate their feelings back to the men. It is not uncommon for women to have a grip on their emotions, and while this stereotype is often overplayed, people genuinely start to view women in this negative light that has been shining on them for no genuine reason.

Men are sought out to be these incredibly capable humans that can do no wrong. While these stereotypes have been engrained in our minds and pushed society to treat each other unfairly, these characteristics of what makes a man so desirable can undoubtedly be found in women as well. For some reason, men are portrayed to have little weaknesses whether that be in strength, or in their personality. Obviously, this is not actually true, for men have made plenty of mistakes and obtain some obvious flaws that all human beings are capable of having. They know they have this power which can easily go to their head and allow them to abuse it, which is a fault in itself. Shakespeare characterizes men in a whole new light in Love’s Labor’s Lost, for the men are complete idiots who do not have a hold on any type of emotion they are experiencing. From the very start of the play, the Lords are instructed by the King to study for three years, meaning they would have to give up eating out, a regular sleep cycle, and interacting with women. While they were willing to give up almost all of those things, the men outraged when the King said they could not interact with women. They agreed to this promise, however, almost broke it immediately for they each fell in love with the Princess and her friends. This not only demonstrates a man’s lack of ability to follow through with what they promise, but also their incapability to sort out their emotions, for they did not even truly know who they loved as the women were able to trick them into declaring their love for the wrong person. The women took the men’s borderline stupidity and used it to their advantage as they called the shots. The women were able to spell it out for them and convinced the men to work hard for a year, and only then could they have their love. Not only is this demonstrating the women’s ability to make decisions and encompass power, but also the men’s weaknesses for they were utterly confused throughout most of this play. Any move the men made, the women were one step ahead, which is what added to the comedic aspect, and emphasizes the women’s intelligence and wit.

Unfortunately, women are constantly depicted as lessor than men, incapable of making decisions in a timely manner, and helpless when it comes to getting a grasp on their emotions. However, Shakespeare has a more progressive attitude in his play, Love’s Labor’s Lost, and highlights women’s abilities and men’s potential weaknesses they may encompass. It is refreshing and eye opening that even in that time period, Shakespeare was able to depict women in a positive light and views them as equals in comparison to the male gender.